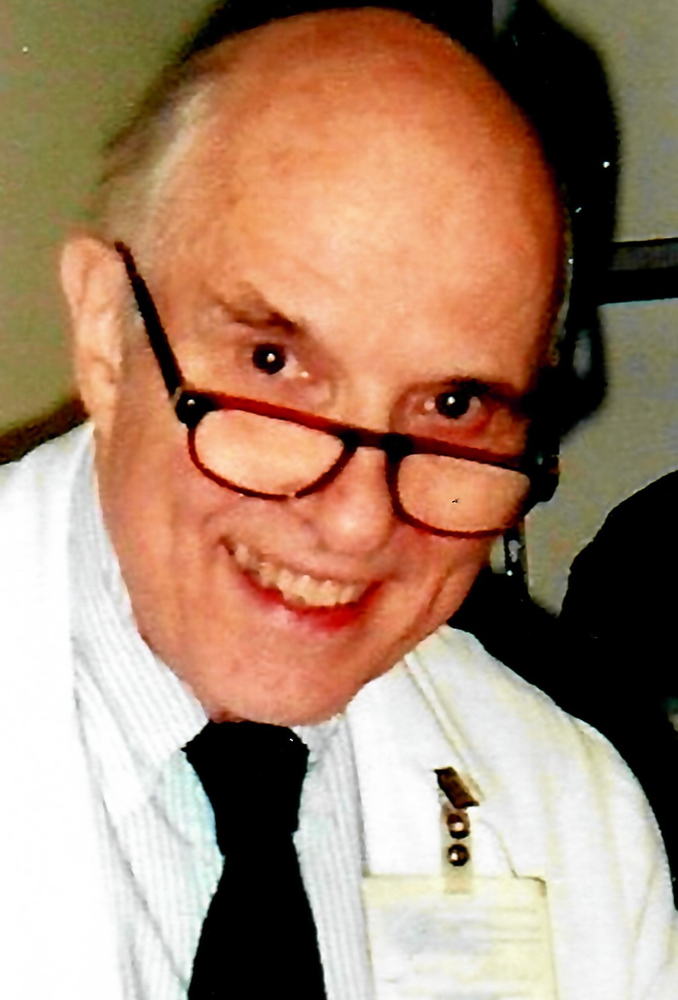 Moore, Francis X. Jr., MD – Loving husband, father and grandfather passed away peacefully at Glen Cove Hospital on Friday, November 8, 2019 at the age of 97. Frank was born on May 23, 1922 in Oyster Bay, New York to Francis X. Moore Sr. and Minnie (Leonard) Moore. He was married to Phyllis Kelloway who passed away in 1993, and is survived by their four children: Francis X. III, Barbara J. (Gail Otis), Jonathan A. (Marlaine Tapply) and Grail A. He also is survived by his sister, Agnes Moore Higgins of Brielle, NJ, and was predeceased by his brother, Sylvester and his sister, Jean and Clair.

In 1995 Frank married Rose Ann Diepering, a widow and registered nurse who practiced at Glen Cove Hospital. He was the cherished step-father of Jennifer Hower and proud grandfather of David Hower.

Dr. Moore was a grandson of James A. Moore, proprietor of a grocery business in the historic "Moore Building" at the corner of South and East Main Streets in Oyster Bay, where President Theodore Roosevelt rented space for his executive staff during the summer months.

Prior to their marriage, Frank's father and his business partner founded the Long Island Coal Company, with an office adjacent to the Oyster Bay train station where Frank's mother worked as a telegrapher.

Dr. Moore's interest in medicine began as a young boy as he accompanied Dr. Myron Jackson on his rounds in town. An excellent student, he graduated from Oyster Bay High School and went on to study at McGill University in Montreal, and Columbia College and Fordham School of Education in NYC. He received his medical degree from New York University through the US Army in 1946.

From 1947-1949, Dr. Moore began his military service as 1st Lieutenant at Fort Sam Houston in Texas. He next served at the 25th Station Hospital, Regensburg, Germany where he was a Captain and Commander of Company A, 1st Medical Battalion, 1st Infantry Division. He also was Battalion Surgeon, 18th Infantry Regiment, and from 1951-1953, he was recalled to be Assistant Chief, Medical Services, 320th General Hospital. At his last assignment he was stationed at 90 Church Street in New York City.

Later in the 1950's, Dr. Moore was one of only two hematologists on Long Island, the other being Dr. Arthur Sawitsky. Initially, his practice consisted of hematology, but as the newly developing field of medical oncology grew, he became more heavily involved in caring for patients with cancer. He was the first doctor to bring hematology and then oncology consultation services into Long Island nursing homes, and also was credited with establishing a fully functioning Hospice Care Unit, in Glen Cove Hospital in 1976. In 1979 he was joined in this endeavor, by Dr. Reed Phillips. Due to regulatory changes in subsequent NYS DOH funding, Dr. Moore's community Hospice at Glen Cove closed in 1986.

His Devotion to terminally ill patients never wavered, and he next assisted the Friends of Hospice Association of Roslyn, NY in setting up Hospice Care of Long Island (HCLI) which later became the Hospice Care Network and the Northwell Hospice, as it is known today.

In addition to his dedication to caring for the terminally ill, Dr. Moore was a superb clinician and diagnostician. During his year at Glen Cove Hospital he served on almost every hospital committee, influencing all aspects of medical care, and was a member of the Medical Board and Chief of the department of medicine, and was instrumental in the development of the Family Practice Model. Known for his ability to handle the most complicated and difficult hematologic and oncologic diagnoses, he also was known for his administrative skills and future-oriented improvements in cancer care. Always ahead of his time, he did much to encourage the advancement of medical care on Long Island, and was revered for the unflappable, kind, congenial and positive attitude he brought to everyone he worked with and cared for.

He and his wife, Rose Ann, retired to The Villages in Florida in 2008, where they enjoyed many new activities ant the company of new friends. They enrolled in Italian classes and joined an opera and philharmonic club.

Dr. Moore was blessed with a long and happy life, filled with the love of family, the joy of practicing medicine, and the gratitude of his patients. He was special to all who knew him, and he will be greatly missed by his family and friends.

Share Your Memory of
Francis
Upload Your Memory View All Memories
Be the first to upload a memory!