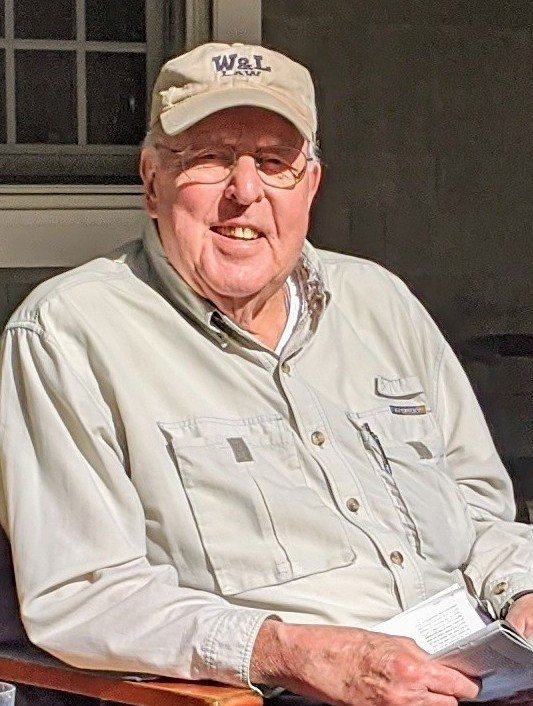 Eugene P. Souther, Esq., of Glen Cove, NY, formerly of Lattingtown, and Muttontown, NY, and Stuart, FL. died peacefully at home on July 16, 2021, at age 90, surrounded by his family. He was the beloved husband of the late Jane Anne, loving father of six children, cherished grandfather of twenty grandchildren and the proud great-grandfather of nine great-grandchildren.

The product of a Jesuit education (Brooklyn Preparatory High School '49, Fordham College '53 and Fordham Law School '59), Gene lived his life in the Jesuit tradition of service to others. Throughout his life and career this commitment to service was driven by his strong Catholic faith and his love of country and family.

Gene was a highly accomplished trial lawyer who successfully represented clients in local, state, federal and international courts and tribunals. Throughout his career, he was a strong supporter of voluntary representation of clients on a pro bono basis.

Gene was a former Chairman (17 years) and retired Senior Counsel at Seward & Kissel, LLP, where he led the firm's Litigation Group for 30 years. He was a Fellow of the American College of Trial Lawyers, serving for many years on the New York Downstate Committee of the College.

From 1988 to 1990 Gene was President of the New York County Lawyers Association.  He served the Association in a number of other capacities, including Vice President, Member of the Board of Directors and Chair of the Finance, Judiciary, Nominating and Investment Committees.  He was NYCLA’s 2017 Recipient of the Boris Kostelanetz President's Medal.

Gene was a member of the Board of Directors of the Fordham Law Alumni Association since his graduation from the law school's evening division in 1959.  In 2012, he received the Fordham Law School Lifetime Achievement Award.

Gene was appointed a Special Master by the United States District Court for the Southern District of New York to hear and report on disputes. He also was appointed an Arbitrator by the President of the Association of the Bar of the City of New York to hear and decide a dispute between an attorney and his firm as well as being selected by litigants to mediate disputes.

One of Gene's most meaningful forms of service was his time as Chairman and Member of the Board of Trustees of St. Francis Hospital in Roslyn.  He served on numerous SFH committees, including Finance, Long Range Planning, Performance Improvement, Human Resources, Mission on Ministry, and Compliance and Audit, which he also chaired.

Since 1972, Gene was an active parishioner at the Church of St. Dominic in Oyster Bay, where he served as a Parish Trustee and a member of the Parish Finance Committee.  He also helped lead the successful Capital Campaign at Our Lady of Mercy Academy in Syosset.

After completing his ROTC commitment in college, Gene was commissioned as a Second Lieutenant in the United States Army and served as an Artillery Officer, completing his service as a First Lieutenant.  His assignments included Battery Commander and Battalion Staff Officer.  In later years, Gene became a proud member of the Sons of the American Revolution.

Among his earliest service commitments, Gene worked as a ocean life guard and swim instructor at Breezy Point, one of the many jobs he held while working his way through high school, college and law school as a proud alumnus of Brooklyn's P.S. 152.

Gene was a lifelong avid sports fan.  He regularly attended NY Giants and NY Rangers games with family and friends.  The Rangers honored him in a special on-ice ceremony on the occasion of his 45th year as a season ticket holder.  From an early age, Gene was also a devoted Brooklyn Dodgers fan, occasionally skipping school to attend games at Ebbets Field.  He became an early and loyal NY Mets fan and in later years he rarely missed a game on TV.  A long-time member of Nassau Country Club, where he spent many happy occasions entertaining family, friends and colleagues, Gene also enjoyed playing golf, tennis and softball and loved both his time on the water as a self-taught sailor and his travels across the country and around the world.

Above all, Gene was a devoted and caring husband, father, grandfather and great-grandfather.

He is also survived by many loving relatives and friends.

Gene was pre-deceased by his dear parents, Winslow and Mary (nee Reilly) Souther, and his brothers, Winslow and Thomas, as well as by his second wife Gretchen.

Share Your Memory of
Eugene
Upload Your Memory View All Memories
Be the first to upload a memory!
Share A Memory