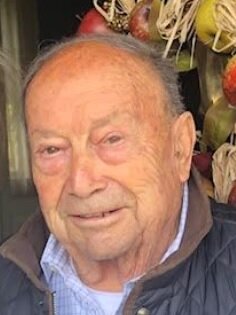 Winston Churchill once said, “Continuous effort—not strength or intelligence—is the key to unlocking our potential.

This is the story about a man whose impacts on the construction industry during the 1960, 70’s and 80’s on Long Island was significant, his love of family, gardening and generosity will be a part of his legacy.

This is so true about how Orlando Zeppieri (aka OZ) lived his life. He was born on October 12, 1929 and raised on a family farm outside of Rome with his parents and three brothers during WWII.

No one had as much drive and energy as the great OZ.

He was born with just two settings- full throttle, then sleep.

At an early age Orlando had to demonstrate he was a quick problem solver when German soldiers overtook the family home and farm.

He worked hard at trying to keep all family members safe and things calm; even after he inadvertently gave a glass of vinegar to a German soldier instead of the red wine he asked for.

After spitting it out he pointed a gun at Orlando’s head and asked him if he was trying to poison him…?

Growing up on a farm outside of Rome in Italy with the Nazi’s pointing a gun at him wanting cow milk or a glass of wine, a college education was never a possibility.

Orlando’s entrepreneurial spirit was also evident at a young age when he thought to sell cigars to help pay for his transatlantic boat trip to America with his younger brother.

He adjusted to his new life in the States quite well, despite the initial language barrier.  He seemed to thrive at the unlimited opportunities to succeed and better one’s life.

He also faced another challenge; winning over a beautiful women, Armanda that he had fallen in love with whose family was (unfortunately for him) from northern Italy.

Like Orlando, she too had ambitions as her life journey gave her the opportunity to come to America to complete her education.

Unfortunately, her mother Emily had every intention of bringing her only daughter back to Italy to marry a man from the North.

Well, that wasn’t going be the case as Orlando was determined to do whatever was necessary to keep her from leaving.

After being introduced by friends we came to understand just how far Orlando was really willing to go.

Their first official date alone included his future mother-in-law in the back seat of the car.

Even as a young man Orlando provided for his parents to help make ends meet.

He also gave his father money to put away and save for the day he wanted to get married only to learn when the wedding day arrived his father had used the money for rent.

Of course that would never deter Orlando who got a second job in the construction industry to pay for the wedding.

Orlando was a tolerant man whose strong family values were put to the test when his mother-in-law moved into the house Orlando built even before he and Armanda where married.

He also had an informal agreement to allow their future children to go to Italy every summer with his mother-in-law for three months as well as learn to speak proper Italian as their first language.

Little did he know that his mother-in-law would repay his kindness by getting him the same exact pair of slippers every year for Christmas.

We believe the final total over the years was 29 pairs when all was said and done.

His love for his wife and the joy they shared lasted for over six decades. Everybody should be so lucky.

As time went on we came to realize he was trying to replicate that in his backyard in Brookville, the size of a football field, and in Windham where Armanda threatened him and insisted on him not having a 2nd vegetable garden the exact same size.

Armanda was fond of saying:
“A person simply can’t go through life having two large gardens to manage 165 miles away from each other…”

Of course like all quick thinkers Orlando found a loophole in her demands:

He “only” planted low maintenance items such as potatoes and pumpkin seed in Windham and so… like clockwork every October he would give the oversized pumpkins to the neighbors and their children.

Orlando was an outdoor sports man who loved fishing, hunting and hiking on his beloved Windy Mountain Farm.

He was a man with good taste and passion for life. He loved smoking cigars and liked to drink a Manhattan every night before dinner.

Orlando and Armanda had very little money starting out but they had the stuff grad schools can’t teach: extraordinary work ethic, great business instincts and integrity.

Orlando was the vision guy and Armanda was the CFO behind the scenes making it all work.

OZ’s banker once told him “he believed it was easier to find a wife than it was to find a great business partner”…well in our mom, he found both.

As one would expect, many of OZ qualities trickled into the household, where the themes were pretty simple:

And always, for crying out loud, keep a sense of humor.

Orlando was always busy – a man in constant motion – but never too busy to share his love of life with those around him.

He taught us to love the outdoors.

He loved surprising friends and family with fresh vegetables and fruits from his beloved garden.

He loved making homemade potato salad with the potatoes from his garden. (Two different kinds…one with and one without onions…of course) He loved cooking on the barbecue using natural coal…serving up “Fred Flintstone” size steaks.

What we came to understand was that dad always believed you needed to be physically and mentally present when running and building your company…there were no shortcuts.

He would never ask someone to do something he had not already done himself or was willing to do.

He was not a delegator…he was a doer.

His dedication to his work was obvious to anyone paying attention and the respect and admiration he received from his competitors confirmed this.

He was a genuinely optimistic man. And that optimism guided his children and made each of us believe that anything was possible.

Orlando could relate to people from all walks of life. He was an empathetic man. He valued character over pedigree. And he was no cynic. He looked for the good in each person — and he usually found it.

He had an enormous capacity to give of himself. Many a person from all different walks of life would tell you that Orlando became a mentor and a father figure in their life. He listened, advised and consoled. He was their friend.

As he aged, he taught us how to grow old with dignity, humor, and kindness.

Finally, every day of his 67 years of marriage, Dad taught us all what it means to be a great husband. He was married to the love of his life. He adored her. He laughed and cried with her. He was dedicated to her totally. In his old age, Orlando and Armanda enjoyed watching Law and Order reruns, the volume on HIGH.

Orlando we’re going Remember you for everything we’ve spoken and we’re going to Miss you. Your decency, sincerity, and kind soul will stay with us forever. So, through our tears, let us see the blessings of knowing and loving you — a great and noble man, and the best father a son or daughter could have.

You were one of a kind…

Share Your Memory of
Orlando
Upload Your Memory View All Memories
Be the first to upload a memory!
Share A Memory